Noise Reduction Software is a wonderful thing ...especially when you're working at the level wot I am.  You look at the pics in the paper from the Prem etc - so many of those snappers are using the same sort of gear as me (especially lens-wise - the good old Canon 70-200mm f2.8) - but they have one bonus - decent blooming floodlighting !!!  Not for them having to bump up the ISO above 4000 and dropping the shutter speed to "slower" ... and if you need to know about ISO check this definition out.

Plus ... the pro "togs" have on further BIG advantage - they have one job to do viz following one team and one team only - or being told to concentrate on one or two players (because these bloomin agencies have several snappers at one game - and someone else will pick up the pieces) - whereas I'm trying to get the best of both worlds - so invariably end up at the "wrong end" - a phrase unknown to the pros !!!

If you get what I mean - here's Matty Warburton celebrating his second goal yesterday - at the "wrong end" (!) ... 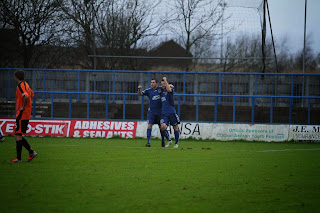 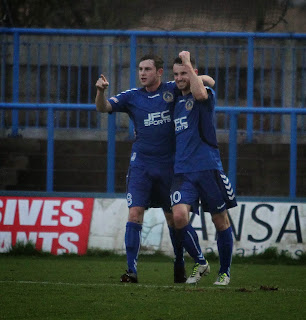 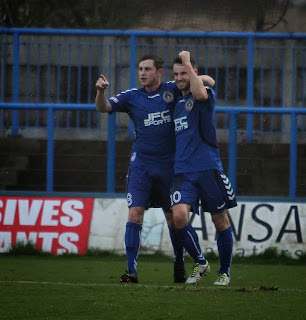 Much better ... does have some drawbacks though - you sometimes end up with a rather "creamy" effect (can be solved by going back into Photoshop and sharpening up) - but sometimes the sharpening means you end up with small white dots on the picture - why ???  Here's a good explanation:

Sharpening works by making brights brighter and darks darker at the edges where lights and darks meet.
When you sharpen an image that's already degraded by noise and JPEG compression, you end up making brighter brights
and darker darks
(1) in places where that shouldn't really happen,
(2) in ways that drive already light pixels to blow out to pure white.

Plus of course ... I'm only playing with Photoshop and Neat Image at the very basic level - because it's always been the case of get the pics up ASAP - especially the football stuff.  Maybe in the more relaxed atmosphere of "STS Photos" - I might try to extend my knowledge !!!
.
Posted by Mike Smith at 20:41