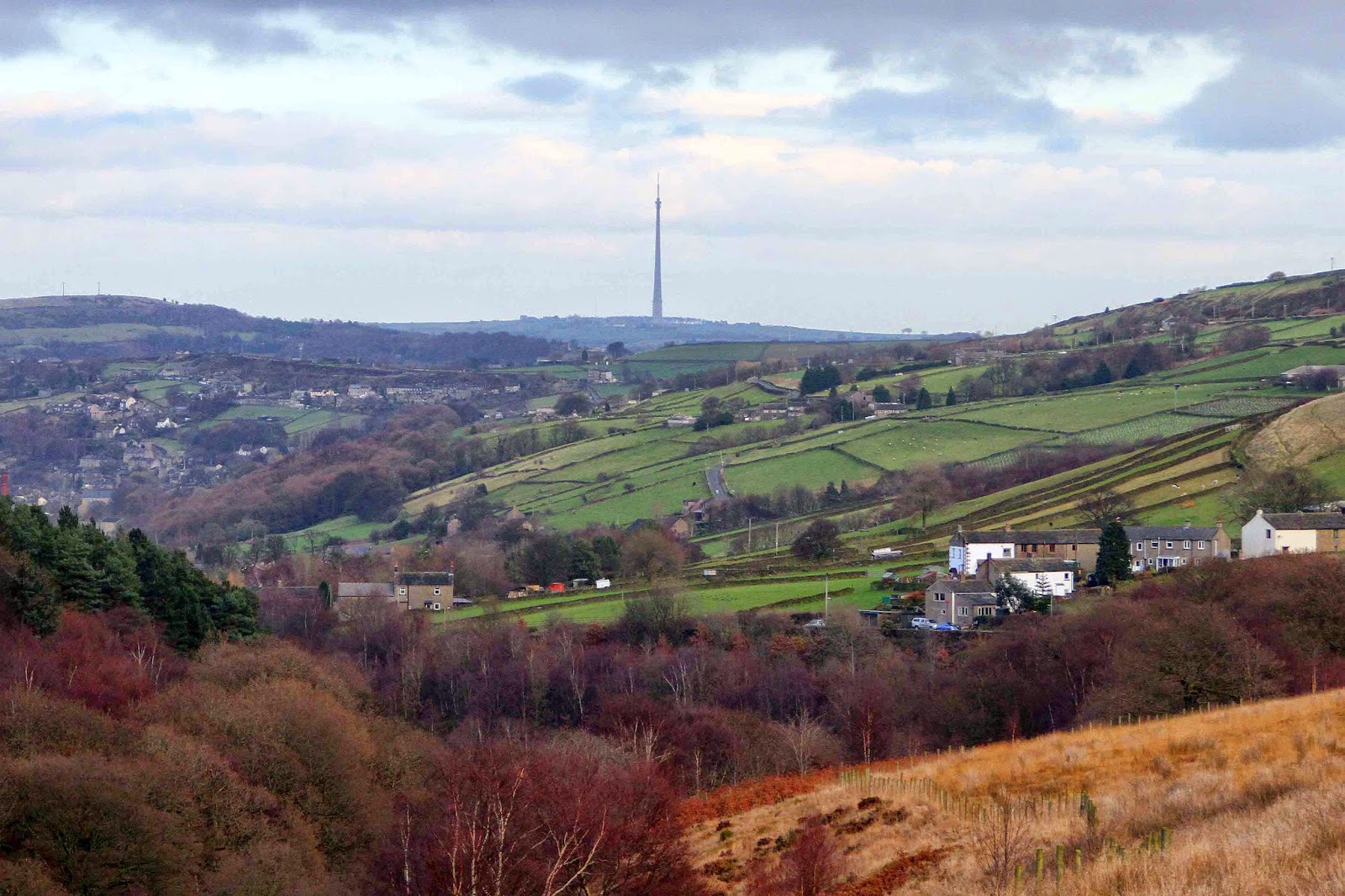 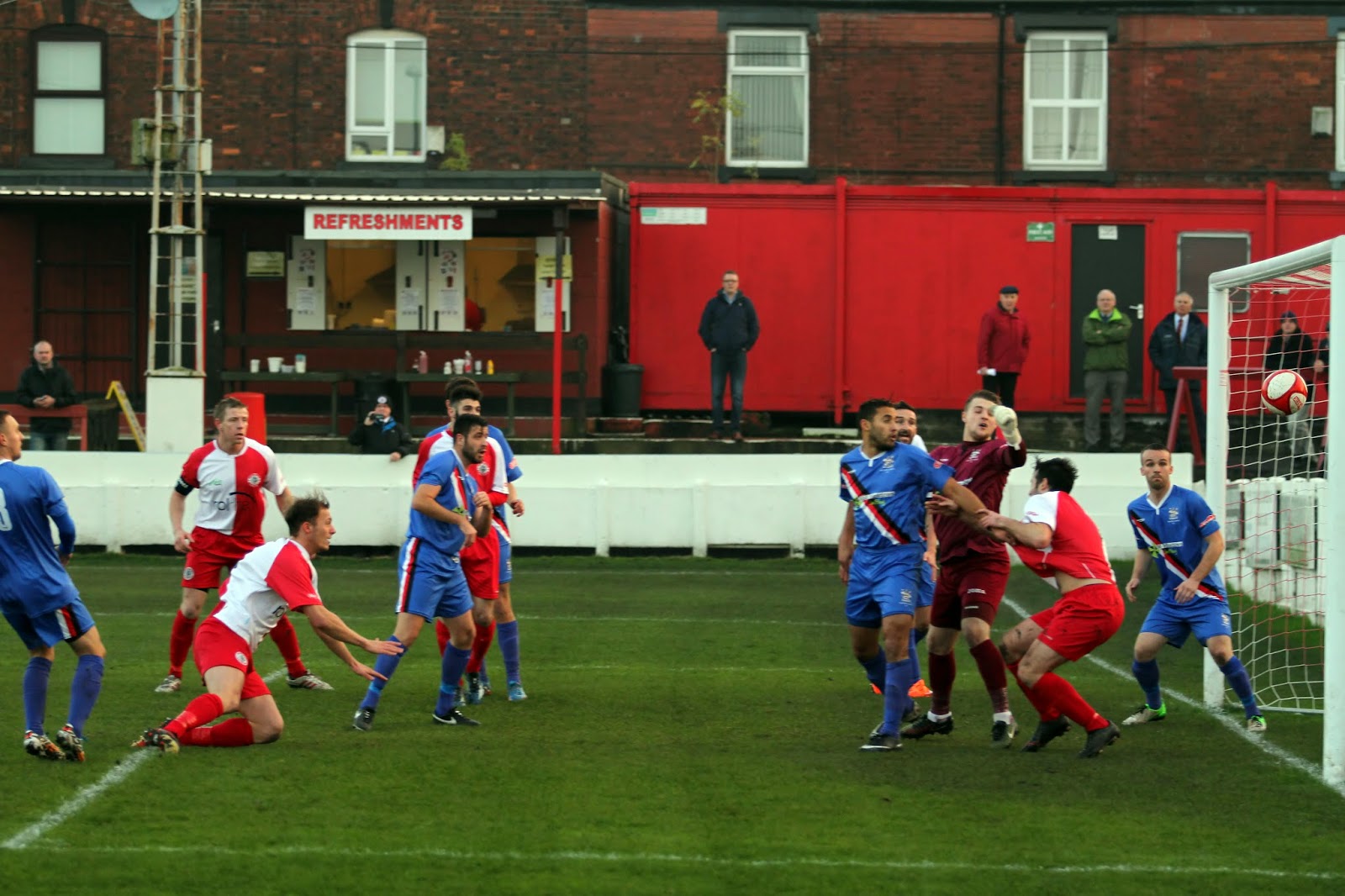 Who's claiming the goal ?? Jack Higgins (on knees) or Dale Johnson (next to 'keeper) ?? 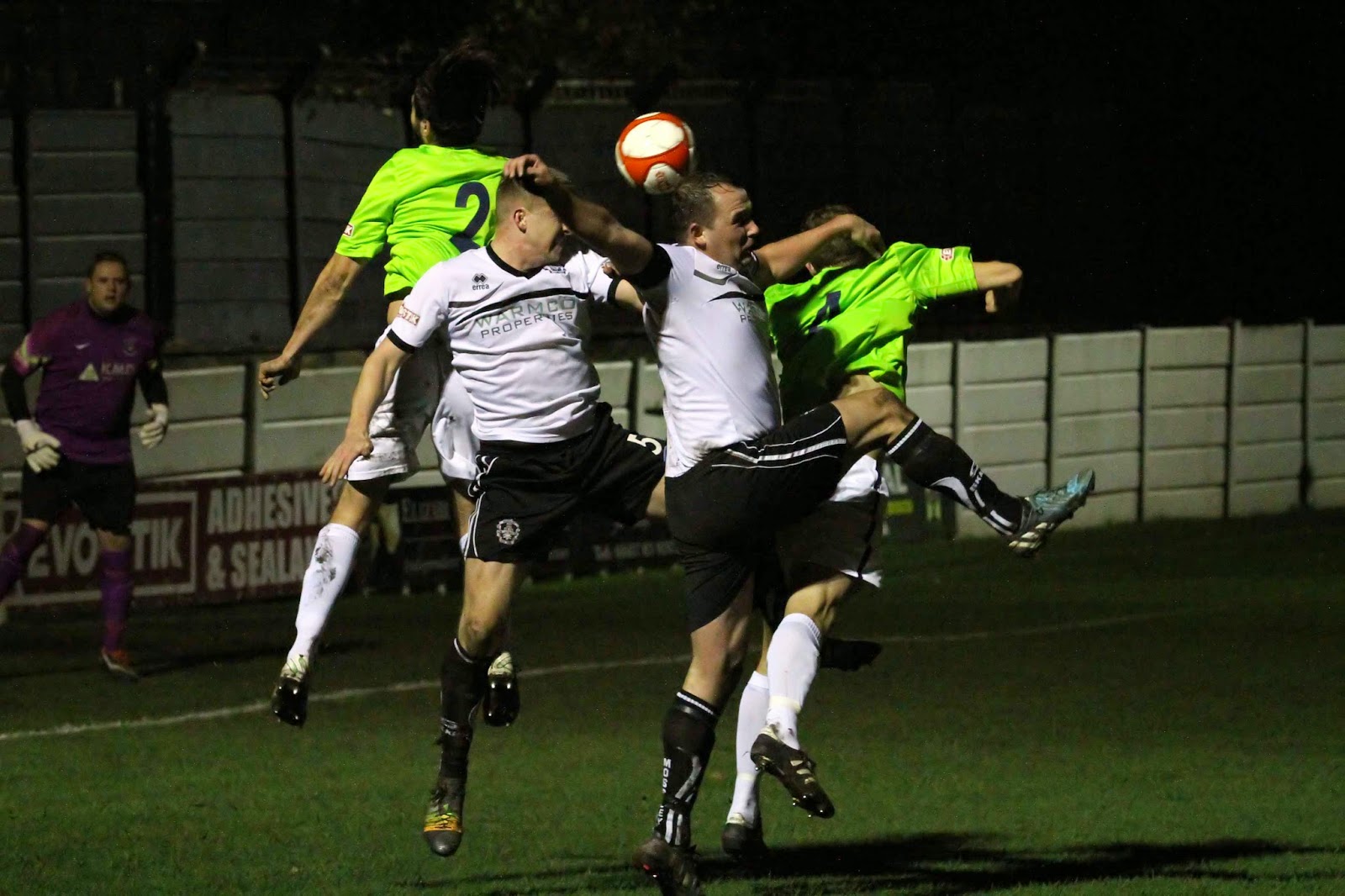 Running a bit late on this one ... read all about it on the Mossleyweb page
.
Posted by Mike Smith at 10:22 No comments: 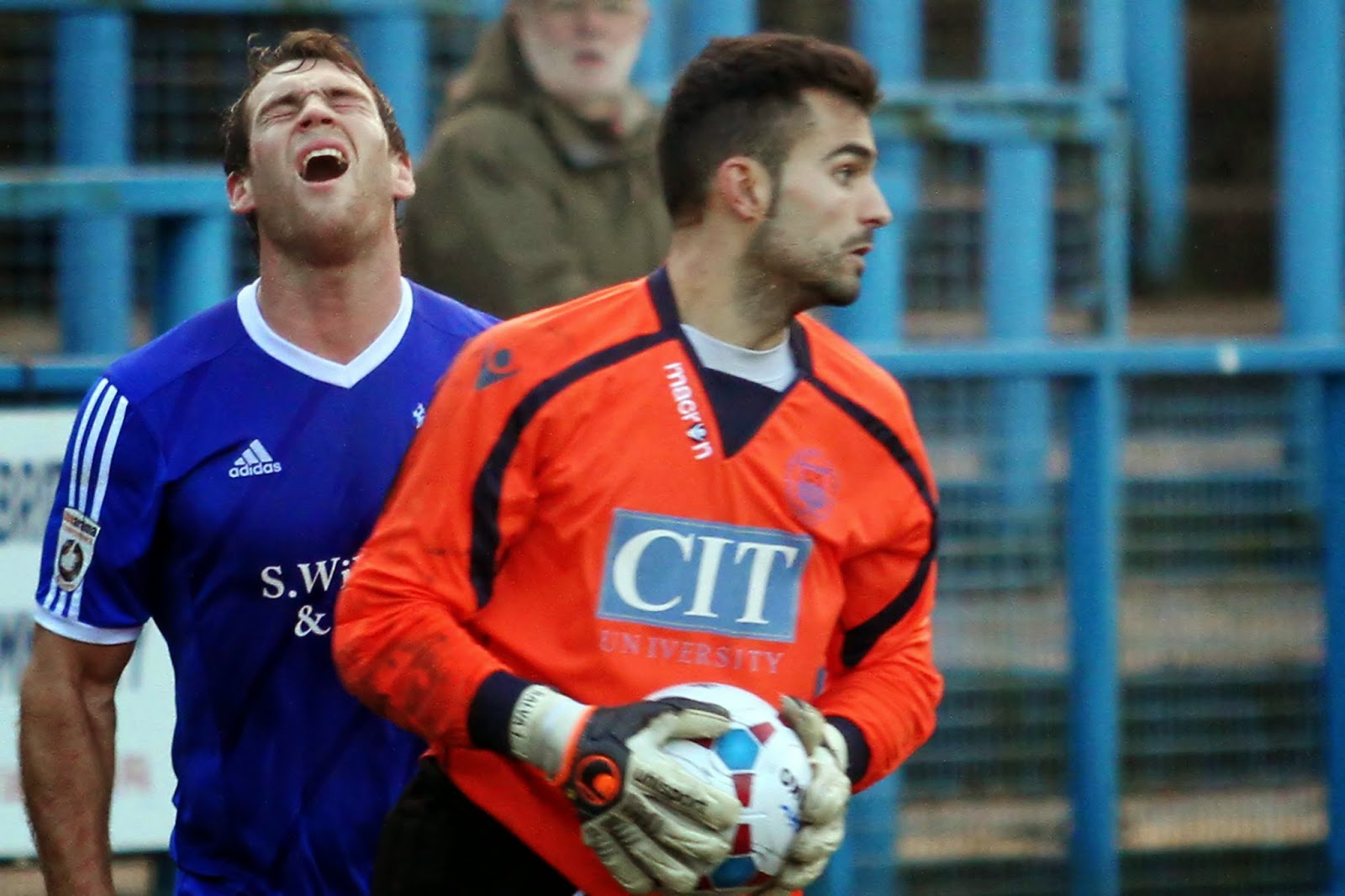 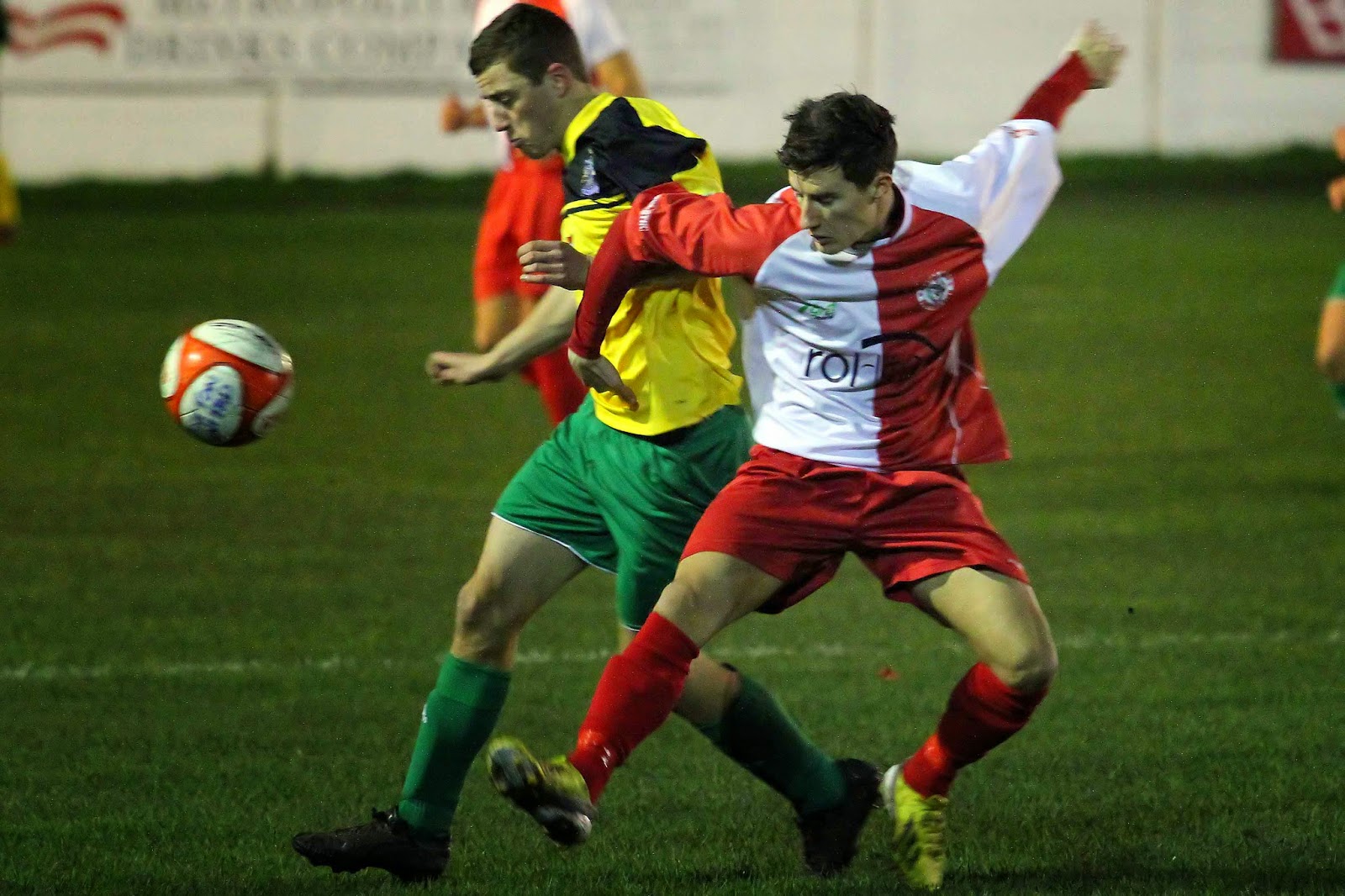 A perfect start - two goals in the first ten minutes - was totally undone over the next 80 ... one team dropped their game, the other team upped their game - and in the end it was Ashton who were hanging on.  Pics at

Definitely two points lost  - and I'm writing this on the Sunday after a 2-5 reverse for the Robins at Witton Albion - who had started the day bottom of the table. 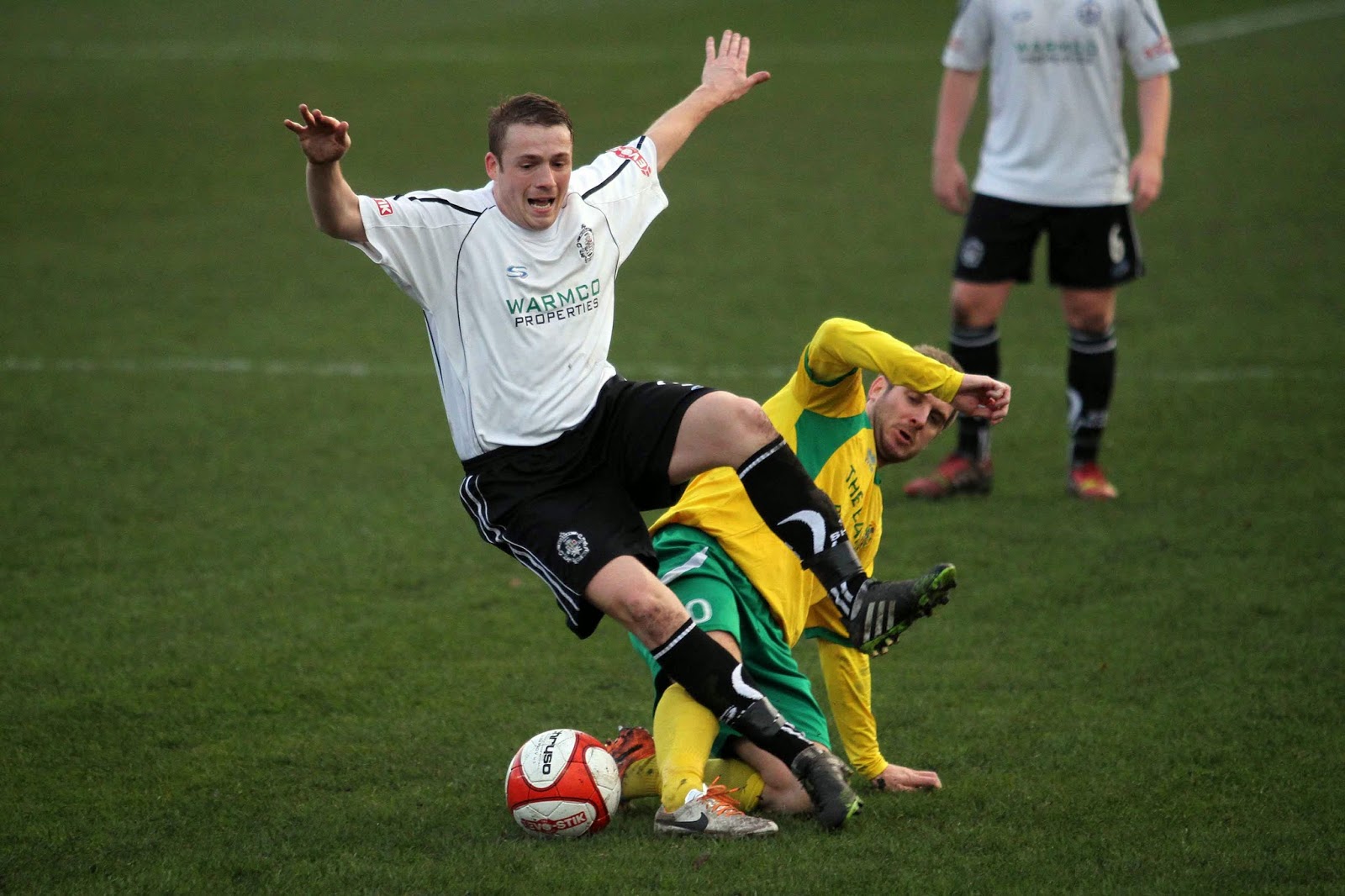 One of many from yesterday ...

I could say a lot about this game (OK you Facebook/Twatter monkeys may well have seen it !!) ... but at the end of the day (aaargh cliche !!) Mossley got what they deserved - an appalling first half saw the visitors 2-0 up (OK they'd cynically got rid of playmaker Tom Pratt for the price of a yellow but ..) 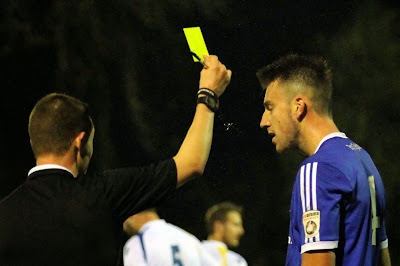 One of many - Todd Jordan sees yellow ...

Sadly no music from "The Darkness" pre-game (at least I didn't hear any !!).

Obviously I'm putting this up a while after the game - and having seen the Celtic Message Board it's all doom and gloom etc etc (there are many on there who say "Full-Time Project = Success - and when it doesn't, sack the Manager, Board, Chairman etc - they need to get real - and if I had time I'd shout my reasons - but I haven't ... tea's on the go !!).  IMHO 'twas an evenly matched game between two sides who need confidence - Lowestoft managed that early goal but after that ...  Trouble was that Celtic struggled to get back in it - OK, equaliser, disallowed goal, but in the end it was a fair result - and for Celtic that's two matches unbeaten (OK draws) but after five straight defeats ???  A step in the right direction - albeit slowly.  Watch 'em go to "Moneybags" Barrow on Saturday and win when no-one is watching (another thing you notice at many games - the pressure on the home team from the home fans - teams can relax more when they go away) !!  Pics at 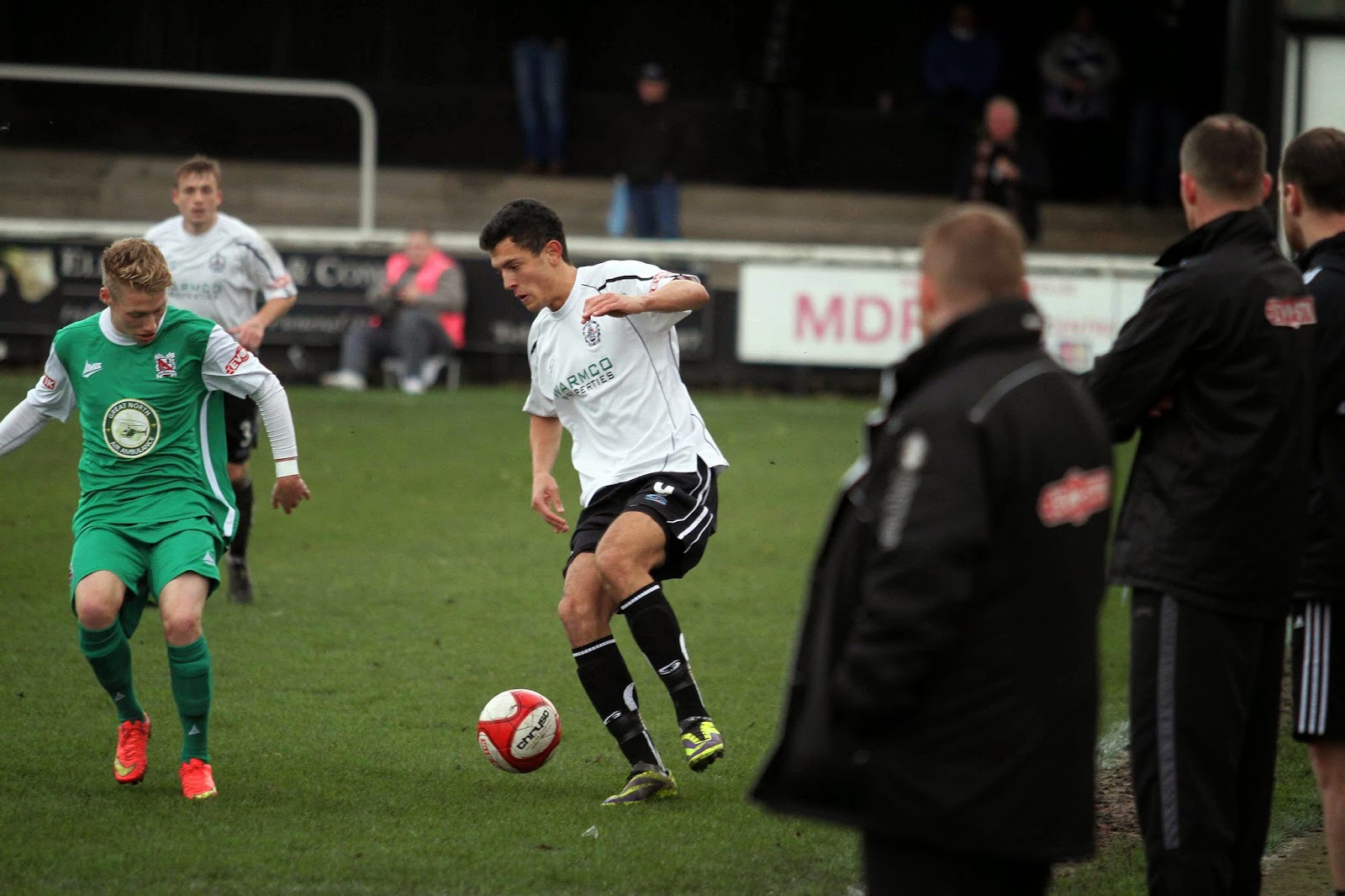 What a pants week that was !!!!  No midweek footy stuff - bloody cups/replays etc - and some appalling weather work-wise - Thursday was an absolute nightmare.  Them country folk in Saddleworth have certainly got into the Christmas spirit ... parcels have gone through the roof !!! Just a shame that the so-called Royal Mail "Managers" (hmmph !) don't seem to have a clue - totally unable to understand the difference between small villages (no shops) and a large town (shops).  Even Saturday was a bit of a struggle to finish - but we got there ...

Football - Mossley were taught a lesson by a team who WILL be promoted this season - and they managed to swell the crowd to nearly 400 (pretty impressive when you consider second-placed Droylsden only got 160 through the gate - and Evo Prem Ashton United managed 105 - and in the Conference North Hyde attracted 304 for their home game).  Another bonus for the Mossley economy was spotted in the local hostelries as well ("Fleece" and "Britannia" did very well I've been told !). No complaints at the end of the day ... pics at

This week - spoilt for choice - but a lot of the Evo-Stik games are in the "Doodson a.k.a. Mickey Mouse Cup" - reckon I'll head off to Bower Fold tomorrow night to watch Stalybridge Celtic take on Lowestoft Town - got to be a first for both clubs.
.
Posted by Mike Smith at 23:43 No comments: 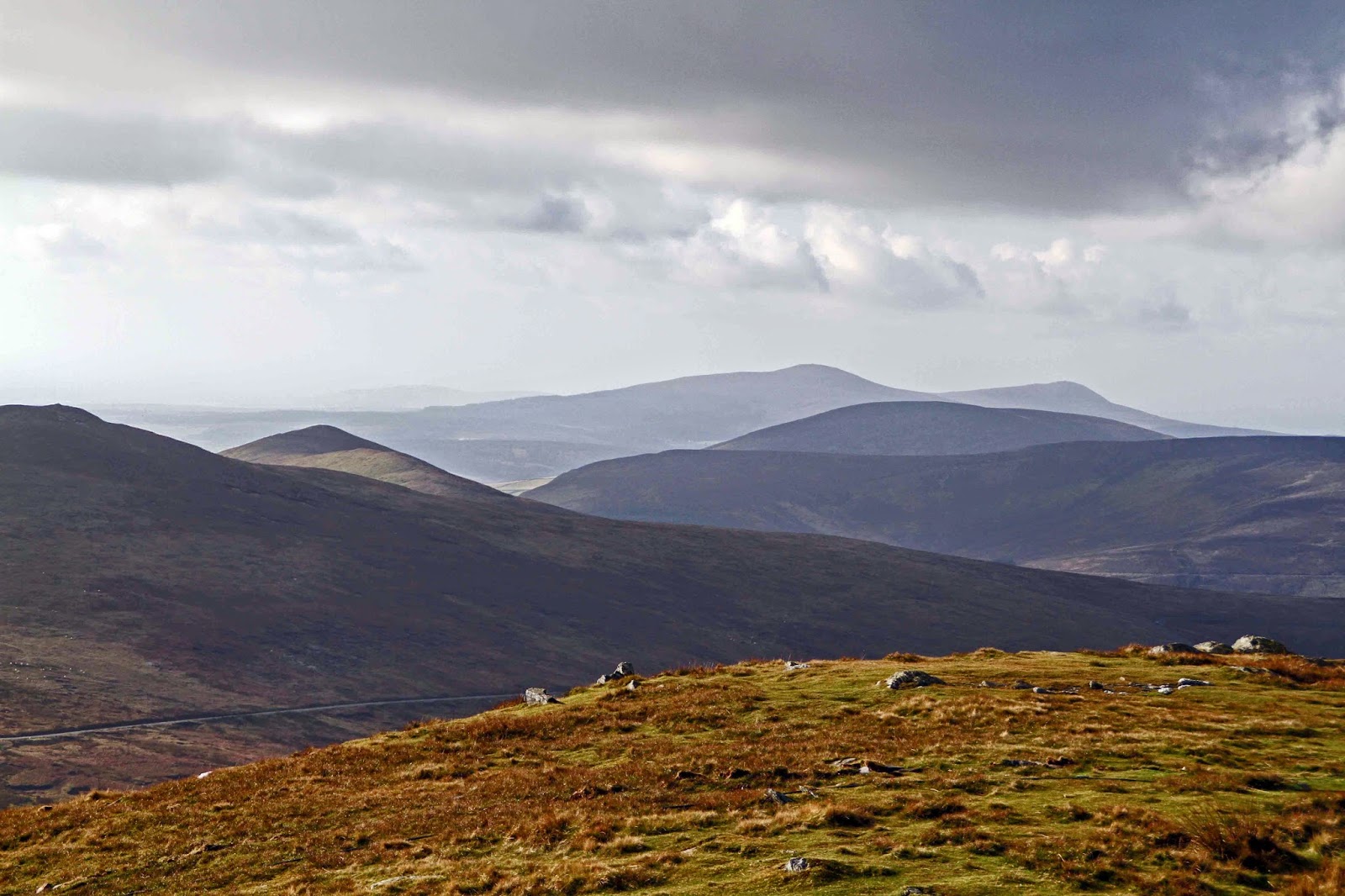 From the top of Snaefell - wonderful ...


A rare weekend away ... took my  Saturday "day off" and me and Mrs S sloped off - a birthday weekend if you like (Mrs S birthday on the Monday so 'twas a "let's make a weekend out of it !!).  Finished work on Friday - home - change - and then off to Liverpool ... to catch the Isle of Man Ferry.  All booked in advance natch !!  Hotel 5 minutes from the ferry terminal (or 20 minutes if you turn left instead of right - my fault!!) Arrived about 2200 - time for a couple of drinks in hotel bar before preparing for the "Big Walk" on Saturday.

And a big walk it was ...  all worked well until the "turn around" at Sulby Reservoir to join the Millenium Way path back to the car - a very confusing bit of path (where there WAS a path) ... and then the rain and the (high) wind kicked in - just as we were knee deep in grass climbing up into the mist - knowing there were further climbs (and having seen the state of the "path") we hit the road towards Windy Corner.  It wasn't good - by now it was gale force and the rain was hammering it down - aargh.  Then - out of the mist - a knight in shining (Land Rover) armour arrived - someone we'd bumped into earlier on and had a bit of a natter. "Would you like a lift somewhere ??" - not half !!  Probably saved us about 2 hours walking in hellish conditions - grateful thanks were given !!!  Back to hotel (Admiral House - thoroughly recommended !!) - to change out of sodden stuff, then out for an Italian (La Piazza) - excellent food - we even sent the bill back (because they missed something off - that's how good/nice/honest WE are) - before finding a decent pub (Prospect) selling decent real ale (the Okells MPA is superb !).

Sunday - another excellent breakfast before heading off to climb Snaefell ... which was the aim of the weekend to be honest.  We've done England (Scafell Pike), Scotland (Ben Nevis), Ireland (Carrantouhill) and Wales (Snowdon) - so we needed another highest peak - and we did it before a fruitless wander around Douglas looking for a tea shop and then ferry back to Liverpool - and home.

A few pics from the weekend at

(obviously when the sh*t weather kicked in - the camera diasppeared into the bag !!!).

Looks like I missed a fairly grim weekend vis-a-vis football - defeats for Mossley, Stalybridge Celtic, Hyde and Ashton United.  Droylsden managed a win mind .. and Curzon have a replay at Northwich Vics tonight ... but naturally the Cup games (and associated replays this midweek) mean nowt local - bugger !!
.
Posted by Mike Smith at 17:27 No comments: