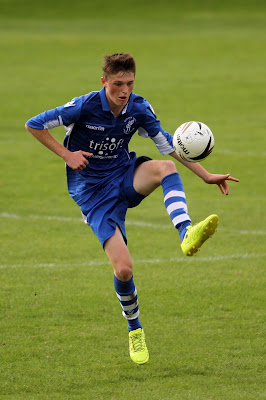 ... in the Central Midlands League South.

I had a week off last week - so we went down to our caravan for a week of rest/relaxation/walks (!).  Pictures from that to come later ... but when you have a Saturday off - it's football.  After a thorough search through the "Non League Paper", this was the best option, given I wanted football and alcohol (!!).

'Twas nice to be asked (yet again) "Are you a pensioner ?" at the gate (visions of Saddleworth Rangers Rugby League !); not just yet (!) so £3 in and believe it or not ... my first visit to Causeway Lane (OK the Autoworld Arena !) since the new stand and Social Club had been built (5/6 years ?).  A good search through my pics might find a picture of Rico (Ian) stood outside the old club with a phone glued to his head !

To the game ... Matlock started really well and by half-time were a well-deserved 2-0 up.  However something happened at half-time - God knows what - and by 90 minutes the home team had leaked 4 goals and had a red card to boot - just seemed like Mickleover wanted it more, and the whole Matlock team visibly drooped under the onslaught.  Given that the First Team lost 2-0 at Mickleover Sports ... not the greatest day ...  Pics from the game at

Home now - a wonderful wet day back at the mail face today - aargh - and catch up with the weekend footy in my locality (not good to be honest) - tomorrow night sees Mossley v Ossett Albion.
.