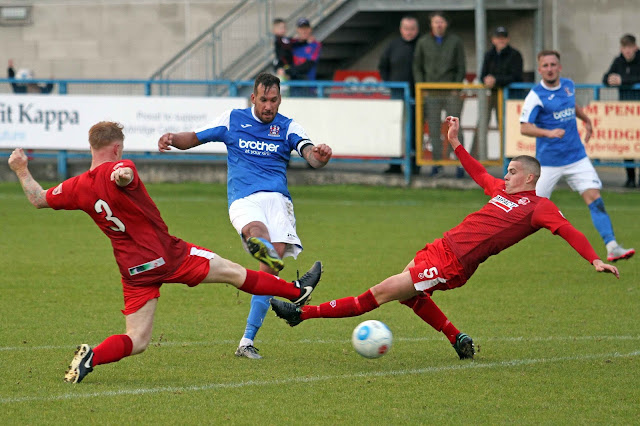 
OK so Mossley were also at home ... but they always lose at home (check out 1645hrs - same as aargh !). However there were other family reasons which saw me head up to Bower Fold on Saturday - so there !!

To the game - a disastrous first 45 for the home team ... 2-0 down, half the managerial team red-carded - and not looking too clever on the pitch ... and I'm being polite !!!  There must have been one fearsome b*ll*cking at half-time (hair-dryers, teacups ... you know the score !) as Celtic were on fire from the 46th minute onwards.  A Chippendale shot which got the slightest of deflections from Scott Spencer - Danny Wilkins coming on - and another Chippy shot ... and then it was 2-2.  From then on there looked to be only one team who were going to win the game ... but then ... in the 92nd minute Alfreton got a really soft foul (see the pic !!!), and - you've guessed it - nicked a totally undeserved winner.  Gutted was an understatement for the majority of the crowd - and those in blue shirts ...  pics from game at